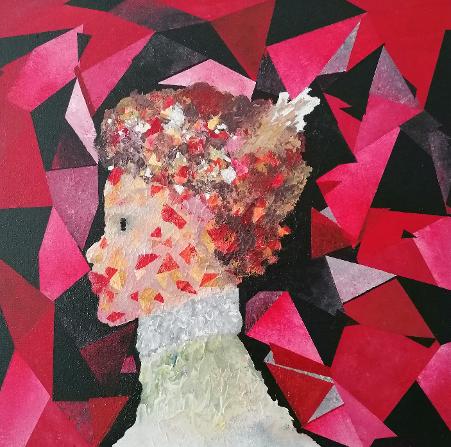 Price: $5000 USD
"Blood Diamonds, Self Portrait", 2021
50 W x 50 H x 2 D cm
19.68 W x 19.68 H x 1 D in
Acrylic on Canvas
One-of-a-kind piece
COA: This can artwork includes a certificate of authenticity.
Shipping: Free from Lisbon, Portugal (EU country).
Tax: EU VAT included in price. International shipping may be subject to customs duties and taxes.
Return Fee: Buyer is responsible for return shipping charges and will not be reimbursed for the original shipping cost.
Refunds: 100%, after 3 days of arrival.
SELLER CONDITIONS OF SALE
Secure transactions by credit card or google pay through Stripe. Use the blue button Buy above.
Have a question?
Ask to info@usia.co.uk or visit usia.co.uk
About the seller on Trustpilot

STATEMENT "African colors always had a strong influence in artists. African art is always colorful. African Continent it is known for having the oldest cave paintings in the world. Our connection with Africa is more than natural and obvious. If skin color changes due to climate change and regions, also changes due to our lifestyle. The racism, tribalism or any other forms of segregation are a form of denial from our ancestors."

CONCEPT Pan-Africanism is a worldwide movement that aims to encourage and strengthen bonds of solidarity between all indigenous and diaspora ethnic groups of African descent. Pan-Africanism is a belief that "African people, both on the continent and in the diaspora, share not merely a common history, but a common destiny". Pan-Africanist intellectual, cultural, and political movements tend to view all Africans and descendants of Africans as belonging to a single "race" and/or sharing cultural unity. (wiki)

STATEMENT "I am descendant from Portuguese, Spanish and Angolan ancestors. My grandmother is Angolan, born in the city of Luanda. Luanda is the richest city in the African continent. I made this artwork, as a self-portrait with the red and black background, i which are the colors of Angola. This colors are also the colors of red diamonds or "blood diamonds"."

BLOOD DIAMONDS Reports estimated that as much as 21% of the total diamond production in the 1980s was being sold for illegal and unethical purposes and 19% was specifically conflict in nature. The creation of Kimberley Process Certification Scheme (KPCS) was very important to restore the control of this uncontrolled sale of diamonds in Angola. The Red diamonds are commonly known as the most expensive and the rarest diamond color in the world, even more so than pink diamonds or blue diamonds, as very few red diamonds have been found. (wiki)

RED DIAMONDS BY GIA Diamonds are prized around the world for their rarity. A gem-quality diamond is already one of the most rare items found in nature. Of all colored diamonds, one color in particular is especially rare: a predominantly red diamond.  “Predominantly red” means that red is the primary color with no secondary hues (like purple).  In fact, red diamonds are so rare, that GIA records show that over a 30 year period from 1957 to 1987 there was no mention of a GIA lab report issued for a diamond with “red” as the only descriptive term. That’s a rather remarkable statement considering the number of diamonds GIA’s nine global laboratories grade each year, and that GIA has graded many of the world’s most famous colored diamonds. Adding to the mystique of red diamonds is the question of how they get their color. GIA researchers, who have been studying diamonds for decades and have access to the most sophisticated equipment, are still not sure what causes their color. One explanation is that “defects in the atomic structure that result from gliding (the slight movement of atoms along the octahedral direction) are partially responsible."

The Hancock Red is one of the most famous red diamonds. At the time of its sale in 1987 it was the most expensive per-carat gemstone ever sold at auction. The hammer came down at $880,000—a remarkable $926,315 per carat, eight times its pre-sale estimate. “The publicity generated by the selling price of the Hancock Red and other significant fancy colored diamonds at auction spurred interest in these rare stones around the world, particularly with celebrities. In addition, diamond cutters better understand how to fashion them to derive more intense colors in the finished polished stone,” said Russell Shor, GIA senior industry analyst.

The Moussaieff Red, another famous red diamond, is a modified triangular brilliant weighing in at 5.11 carats.It was included in the 2003 exhibit, “The Splendor of Diamonds” at the Smithsonian National Museum of Natural History. Four other diamonds in the exhibition dwarfed the Moussaieff Red, yet gemologists still regard it as a breathtaking specimen worthy of inclusion. A Summer 2003 article in Gems & Gemology had this to say about the Moussaieff Red: “…for a diamond of this color it is astounding—” (“Fancy” is a term GIA uses for grading colored diamonds, with Fancy Intense, Fancy Deep, and Fancy Vivid having the strongest color and considered to have the greatest value). (GIA.edu)

ANGOLA Angola was destroyed by a devastating civil war that started in 1975. The Portuguese colonialism during the fascim or right wing government of Salazar, made Angola, as well other countries in Africa, a colony to be "protected" in 1961until the end of 1975. The so called "The Portuguese Colonial War".  Although in 1975 after the Portuguese Revolution, Angola entered in a very dangerous and violent civil war that ended in 2002, this country lived in civil war for many years.

ARCIMBOLDO This portrait it is inspired on the portrait of "Spring' by the artist Arcimboldo (born in 1527), of mannerism or Late Renaissance. In 1563, at the age of 36, Arcimboldo left Italy to work in the imperial courts of the Habsburg rulers, where he successively served the emperors Fernando I, Maximilian II and Rudolf II, becoming one of the favorite painters of the court, making several decorations for the imperial theater and portraits of the royal family."

Occultism was an important reference for Arcimboldo, as we see in his anthropomorphic landscapes, in which human bodies and faces are suggested by the representation of reliefs, trees, stones, and other elements of a landscape, and in his series related to nature , for example, “The Four Seasons”, made for Maximilian II. In this series, the artist made reference to the portrait genre, preserving the opulence of the courtly portrait, but built his characters from images of fauna and flora. Surrealists appreciated the fascinating mix of satire and allegory in Arcimboldo's works, and placed great value on the visual play that exists in his compositions. (wiki)