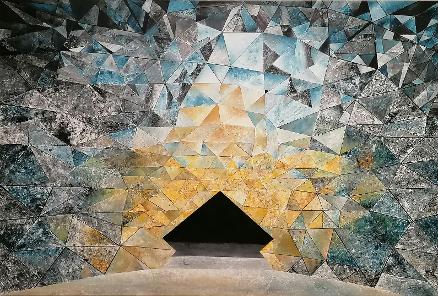 About this artwork: This artwork was made when Francisco Lacerda saw images of the Crystal Dom, in Swarovski Museum in Austria. It is amazing project, based in Science theory of Geodesy (Crystal Dome was modeled after Sir Richard Buckminster Fuller's (1895–1983) geodesic dome, whose architectural design perfectly reflects the principle of geodesy. Geodesy is the scientific discipline devoted to geographical measurement and representation of the Earth; in mathematics, it designates the shortest path between two points on a curved surface).

“Welcome to the new Age. The Age of Diamonds, a new age confirms that we are heading to a world where people will start investing in diamonds as safe investment and not gold. Not because gold will disappear, but just because diamonds will start being more used for different proposes. With the emerging middle class around the world, specially from China, India, South América and Africa, there´s no doubt that people will start to look and afford this raw and polished material. Diamond such as other raw precious materials, will be the solution for the money printing world bank society. Money is virtual and will not substitute the tangible value of this material. Diamond can be trade everywhere and it is beautiful. Fake or not, Natural or Synthetic, it gives a sparkling and shine to our lives. Am I right? Not sure, but it is my opinion…" Francisco Lacerda

BIRTH OF THE MODERN DIAMOND INDUSTRY

The world’s love of diamonds had its start in India, where diamonds were gathered from the country’s rivers and streams. Some historians estimate that India was trading in diamonds as early as the fourth century BC. The country’s resources yielded limited quantities for an equally limited market: India’s very wealthy classes. Gradually, though, this changed. Indian dia- monds found their way, along with other exotic merchandise, to western Europe in the caravans that traveled to Venice’s medieval markets. By the 1400s, diamonds had become fashionable accessories for Europe’s elite.

In the early 1700s, as India’s diamond supplies began to decline, Brazil emerged as an important source. Diamonds were discovered in the pans of gold miners as they sifted through the gravels of the Amazon River and its tributaries. Once it reached its full potential, Brazil dominated the dia- mond market for more than 150 years.

While sources changed, the diamond market experienced its own evo- lution. The old ruling classes—diamonds’ biggest consumers—were in decline by the late 1700s. Political upheavals like the French Revolution led to changes in the distribution of wealth.

The 1800s brought increasing affluence to western Europe and the United States. This broadened the demand for all kinds of luxury goods, including diamonds. In the late 1800s, just in time to satisfy the expanding market, explorers unearthed the first great South African kimberlite pipes.

The buying and selling of diamonds is now a multibillion-dollar inter- national industry. The factors that contributed to its phenomenal growth are part of the diamond trade’s history. As you’ll see, it’s a history of hard work as well as of political and social upheaval.